It's been 1 month and 1 week since Gotcha Day. It's been almost 1 month since we've been back home with our Mini-Lu.

She is simply amazing. She eats well, sleeps well, plays well, follows directions well, such an easy child to take with me on errands, etc...and did I tell you that she's two!?

I keep telling everyone that I feel like we won the lottery with her.

We came to the conclusion that going outside of our DNA was the answer to having a low-maintenance child. I know, I'm probably jinxing myself...but hey, we will gladly take this season, for however long it lasts!

I was reading back on this adoption blog, and it's amazing to me that she has already lost a lot of the "quirks" she had in China.

First sentence is what I wrote in China, the following (in blue) is how she is now:
She hates having her pictures taken. She still doesn't seem thrilled, but she'll throw out a half-hearted "cheese" when I aim the camera her way.
She hates having food broken in pieces in front of her. Now she doesn't mind at all. She has quickly adjusted to feeding herself without making a mess. If something is too big, she knows we break them apart for her. Mealtimes were challenging in China; at home it's been a breeze!
She has random spurts of crying moments, but she settles down quickly on her own. She throws mini-fits when things don't go her way. She rarely has any fussy moments. If she does, when we tell her to stop whining, she quickly stops. She then tries to use her sign instead (like "please"). Once in a while, she fusses more with Daddy when doing something she doesn't like (e.g. pour water over her head during bath time), because she knows he's more of the "softy" between the two of us.
She is NOT a morning person. This has changed as well. Now, as soon as we open the door, she jumps up in her crib and is BOUNCING with all smiles, ready to get the day started.
Very playful and giggly. She SQUEALS like crazy (and gets VERY loud) when she's excited. Oh, this has not changed. Her squeals are SO high-pitched. We're still not quite used to it!
Great traveler. This has not changed. She does great in the minivan. Most of the time she falls asleep as soon as we start driving somewhere.
Gets into everything in the hotel room. This made me think it will be a little tough transitioning her into our house...but I was wrong! Seriously, by Day 1 or 2 of being home, she learned the boundaries of where she can freely go/where she can't, what she can touch/what she can't, etc. She learned quickly to pick up after toys and stay within the proper boundaries (most of the time - what toddler doesn't test the boundaries once in a while).
She loves to play with Peanut. This has not changed one bit. Although she has warmed up to her other sister significantly as well (and vice versa).
She also would rather drink water out of a cup or a bottle, instead of using a sippy cup. Now that we're back home, we always have a cup with a lid & a straw available for her...and she uses them just fine. She also has learned to "spit" when brushing her teeth.
She loves bananas. She loves any food. Mealtimes are her favorite times of the day. We just call out that meal is ready, and she comes running & squealing, with a HUGE smile on her face. She then raises both arms high to be picked up (to be placed on her highchair).
She doesn't seem to like rice. She will eat rice as long as they're mixed in with something (sauce, meat, etc.). We haven't given her plain rice in a while...who knows, maybe she likes it now. She simply loves to eat!
She does not like to get her poopy diaper changed. Most of the time, she's fine with getting her diapers changed (again, sometimes she tries to play on Daddy's heartstrings by being fussy).
She waves at everyone who walks by. She doesn't initiate this herself like she did in China. But if someone waves, or if we tell her to wave, she gladly waves at them.
She wants to do everything herself. This has changed significantly. She really likes it when her sisters help her to do stuff (like put her shoes on).
She waves her arm up and down for not wanting something AND for wanting something. She has learned so many baby signs and uses them appropriately - please, more, all done, thank you, etc. She understands pretty much everything that we say to her. She follows directions SO well.
She is a joy!!! Um, YES! Everyone who comes into contact with her is immediately in love with her.

Medical checkup and home visit:
Her first medical checkup went great! The doctor had no concerns for her physically or developmentally. She told me to just come back in six months for another checkup. Hallelujah!
Another surprising fact was that she weighed at 25th percentile (in U.S. charts). Neither of our other girls ever weighed that high, I think (they probably still don't). When you first see her, she looks small, but when you pick her up you'll realize that she's SOLID.  She has some strong legs...maybe soccer or volleyball may be in her future!?
Our first post-adoption home visit went extremely well. Our social worker was amazed by how well she has adjusted (especially that we don't have any problem with her sleeping through the night - not once, except for jetlag days). She was also amazed by how "advanced" she seemed developmentally, compared to other orphanage-raised children in similar age that she'd seen. It's ironic because her "special need" was "motor development delayed slightly." So far we've seen zero sign of that.

She learns new routines so well. When we tell her to "Get your shoes," she gets them and waits by the door. When we say "nigh-nigh time," she goes to her room. When we get out a book to read, she immediately goes to sit on the couch. She gets excited when we approach her sisters' schools to pick them up.
She also has learned to repeat some words, like "nigh-nigh" and "plea" (for "please"). She's become more talkative within the last week or so...we look forward to the days when we can understand all that she's trying to say.

Our family:
Daddy is still the favorite out of the two of us, but she is starting to reach out to me (to sit on my lap, for me to read to her, etc.) even when he's home (before, it was ALL about Daddy when he's home, although she never refused or disliked me). She still likes to follow him around the house.
Peanut is still the favorite out of the two siblings, but she and LittleBit have developed a much closer relationship in the last week or so. I think it really helps that we have one day a week for her to be alone with each sibling (with just LittleBit on Tuesdays, with just Peanut on Fridays). When it's just LittleBit and Mini-Lu, they seem to get along better. When Peanut is home, Mini-Lu is quickly drawn to Peanut. I am so proud of LittleBit. She has come a LONG way. She now is very affectionate towards Mini-Lu. She LOVES to help change her diaper, get her shoes on, bring her toys, etc. She's really starting to fall in love with this new "big sister" role. I think things began to improve when preschool started for her.

The only one who is still trying to "get with the program" (emotionally) is me. I have good days and bad days. But even in this process, God is showing me how "gracious" He is. He's allowed me to connect with other adoptive moms who can understand and give insight. I know that it's a day-by-day process, and I already know the outcome (with God on my side, nothing but victory!). I also am aware of how very blessed I am. I often watch my three girls play, and I'm in awe. Really, God? Really? I am really blessed THIS MUCH? It's an indescribable joy.

Mini-Lu continues to live up to her name...even when I have bad days, she constantly shows me GRACE. She lets me hold her and she will quickly lay her head on my chest as if to say, "It's OK, Mommy. I'm not going anywhere. It will all be OK."

I've been receiving notes from others on how "amazing" our family is for going through this adoption process. I appreciate the kind words...but who's been more "amazing" through this process is our Mini-Lu. Who's been the most "amazing" is our God who has blessed us with such a treasure.

Here are some pictures taken last week, on the 1-month Anniversary from Gotcha Day. 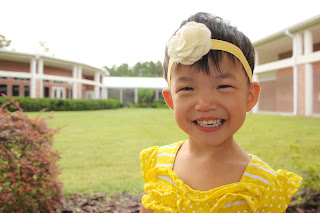 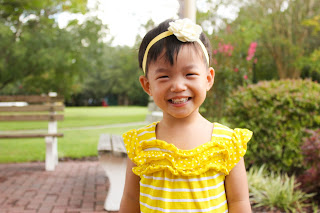 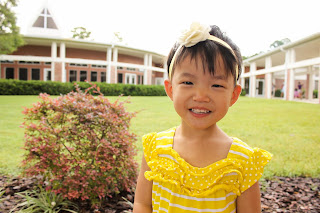