The girls have been sleeping very well since we left Japan. They are out as soon as we put them to bed, and they wake up around 7:30am.
This morning we did some laundry (on our last night in Beijing we realized that there was a washer/dryer in our room this whole time!) and packed. We then ventured out to find breakfast and do our very last sightseeing before we left Beijing. We returned to the fancy mall we found yesterday, because we knew we can find familiar food there. Today we found a cafe that sold pancakes. I had chocolate and banana pancakes, Allan had pancakes with eggs and sausage, and the girls had pancakes with fresh fruit. They were all very good; the fruit was so fresh and yummy. So far we've had very good luck with the food here, which I know is not always the case for many foreigners who visit here. We're very thankful, as we're a family who love to eat!
We knew that Tiananmen Square, the Imperial Palace, and the Forbidden City were within walking distance from our hotel. We decided to take a walk there as our last adventure in Beijing. We quickly realized that this was probably a mistake. The walk was a bit longer than expected, it was getting muggy, and the girls were quickly becoming fussy. We finally made it to the Tiananmen Gate and walked around a nice garden area (which I later understood the place to be called "Park of the People's Culture"). We didn't make it to the Forbidden City, as we were told from an English-speaking person there that it will be another 5+ min walk. From what I understand, the Imperial Palace is where the royal family & officials used to live, and the Forbidden City located inside the Imperial Palace is where the emperor and his immediate family used to live. Before we scheduled out our days in Beijing, we were told from several families that a visit to the Forbidden City could have easily been skipped, especially with little children. We were glad to have taken that advice, as we didn't even make it to the gate of the Forbidden City with our little ones.
We took a quick walk through the park and headed back to the hotel. 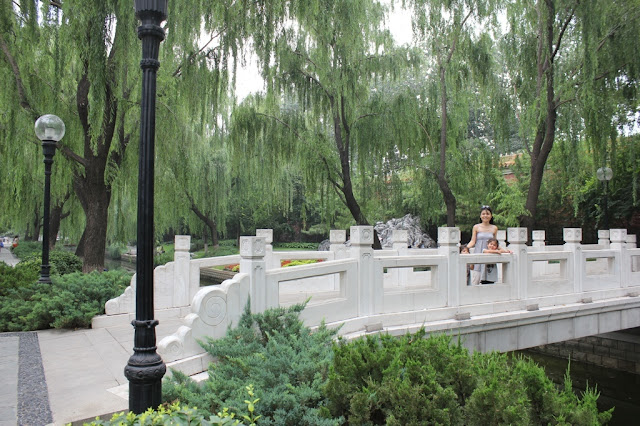 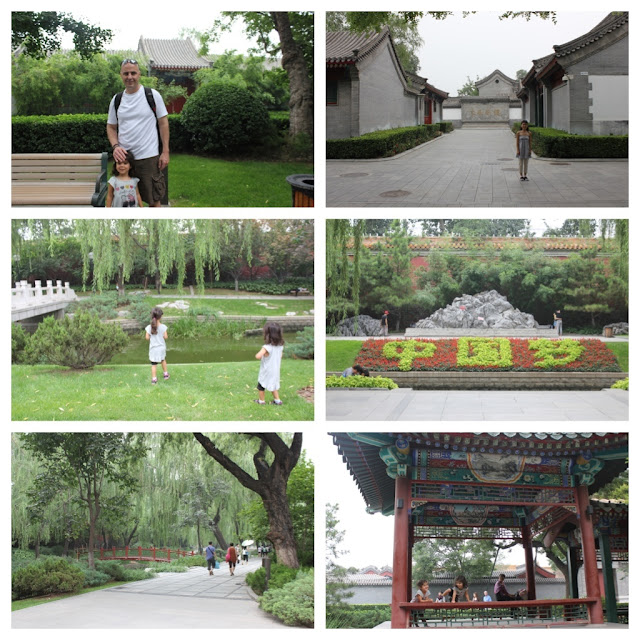 I had to take a picture of this guy with an umbrella hat... 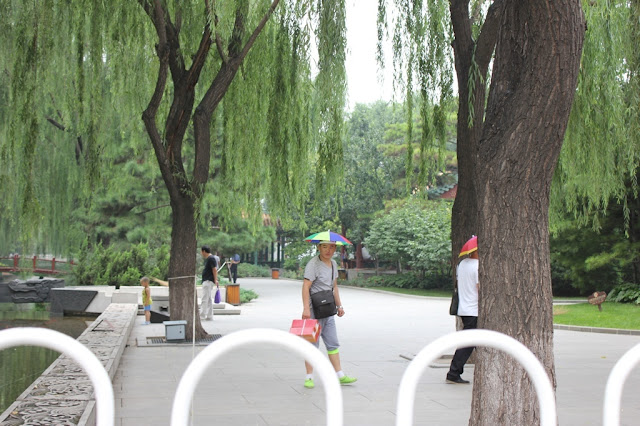 We finished packing at the hotel and took a cab to the airport. We thought we were going to be super early. But the airport, just like anywhere else in Beijing, was a zoo. It took us forever to find the right checkin counter. The girls were super cranky at this point (especially LittleBit). Both of them wanted to be carried, we had tons of luggage with us, and it was a mess. I began to panic at the thought of having one more child added to this mix next time we're at the airport.
I couldn't fit the whole view of the airport in this picture - this was just one terminal. 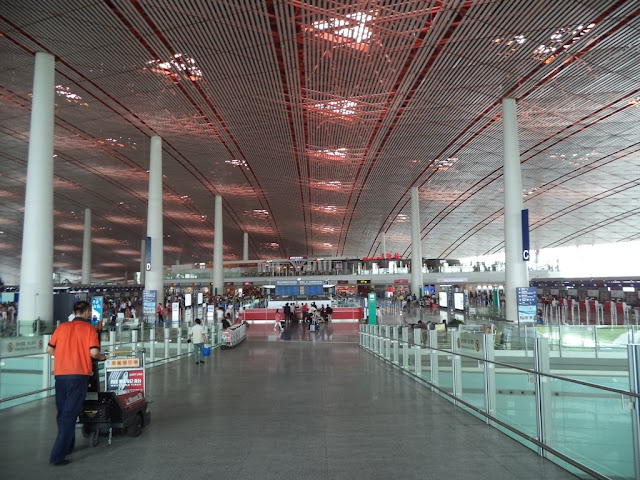 Getting through the security checkpoint was a big ordeal too. There's just people everywhere. LittleBit had a meltdown when they made her take her light-up TinkerBell necklace off (that she got from Disney). Somehow we made it through. I quickly grabbed some KFC for lunch. We then boarded the plane - it was "divide and conquer" time again. Peanut and I sat together; Allan and LB sat together way in the back. I ended up sitting next to an elderly Japanese guy who was visiting a friend in Hohhot.  It was his first time in China too.
Side note - almost everyone here starts speaking to me in Chinese. That was expected, but what's been so funny is that I don't realize they're talking to me because the language is not familiar to me. Many times Allan would tell me that someone was talking to me and I completely ignored them. It also cracks me up that as soon as they realize I'm Japanese, the first thing they say to me (if they can speak English) is "Oh, you look like you're Chinese." I want to say, "Um, yeah, and I look Japanese too."
It was a very short flight to Hohhot (an hour at the most?). We were greeted by our guide that our agency had arranged. Her name is Aggie. She seems really nice. She said she saw Siana many times during her visits to her orphanage. I can tell that she's very proud of her city, Hohhot. There are 2 million people living here (compared to 20 million in Beijing). She said it's a much slower pace of life in Hohhot - she assured us that it will be a much more relaxing experience for us.
Another side note - every place in China seems to be growing like crazy. They are literally building cities - several tall buildings/condominiums at once. Our guide told us that economy in China has increased in the last decade. More people are able to afford cars, nicer homes, etc.
We checked into the Sheraton hotel at Hohhot. It's a nice hotel, without a doubt, but after our mansion in Beijing...we realized how much we have been spoiled. I miss our 2-bedroom apartment badly.
Oh, I almost forgot, when Aggie picked us up, she informed us that we will not get Siana tomorrow as planned. We will get her on Tuesday. She said something about the international adoption lady being out of town and she won't be able to bring Siana to Hohhot until Tuesday. That was a bummer, but Aggie told us that she will take us to the Grassland to experience some of the Mongolian culture tomorrow. I asked Aggie why people keep staring, smiling, and commenting on our girls. She said it's because Chinese people believe "mixed blood" (multi-ethnic) children are the most beautiful children in the world.
Aggie recommended some restaurants for us before she left us at the hotel. We took a walk down to a Japanese restaurant. The menu was written in Japanese also, which helped a lot! People here definitely seem to stare at the girls even more so than in Beijing. When I call one of them to order something, at least three of them would jump and stand by our table. When we first sat down, they all stood there and waited until we ordered. It was bizarre.
We took a short walk around the neighborhood after dinner. It's a lot different than Beijing. We get more of the "local" feel in this place, and we love that the streets are not as busy. We do feel a lot more relaxed here already. People seem to be friendlier. The girls seemed happier by the end of the day, too. 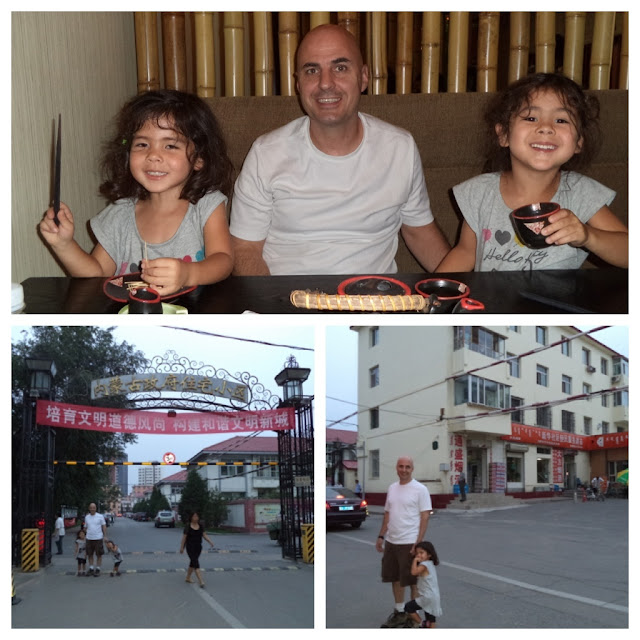 OK, I think that's it for today. We are loving Siana's home province already.
Oh, one more pic. Here is the view of Hohhot from our hotel room. 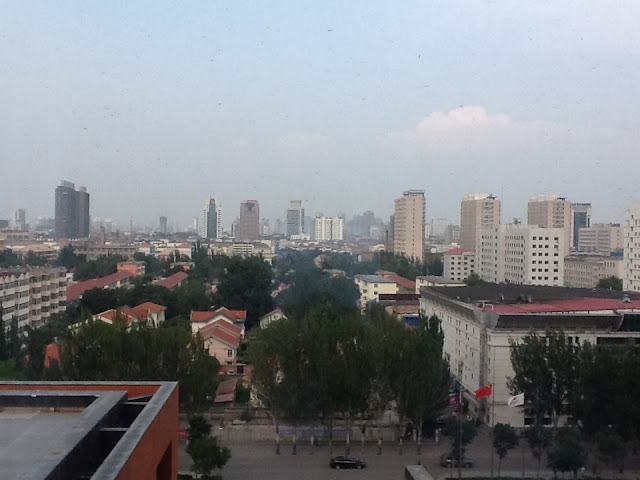 God is Gracious,
Maria
Posted by Boo Parry at 7:05 AM