Just like yesterday, today ended up being busier than I expected it to be. Peanut woke up before 4am again. Despite the lack of sleep, she does fine throughout the day. She crashes as soon as she gets into bed (which was around 8pm last night). She then wakes up between 3 and 4am and can't go back to sleep (except yesterday, when she was worn out from Disney). LittleBit is doing just fine with the time change, sleeping until 7am or later. Allan and I seem to have adjusted as well, we just can't sleep in the mornings due to our firstborn making noises while she tosses and turns for 3+ hrs. We went down to the hotel breakfast buffet again. Mimi had something scheduled for today, so for most of the day it was the four of us and PapaG. Everyone went down to the pool in the morning while I got ready and packed. We did some more laundry. I walked down to the local grocery store to buy some food for our China trip. The five of us walked down to the park that Mimi and PapaG took the girls to yesterday. It was a beautiful and serene park, right in the middle of a busy city. 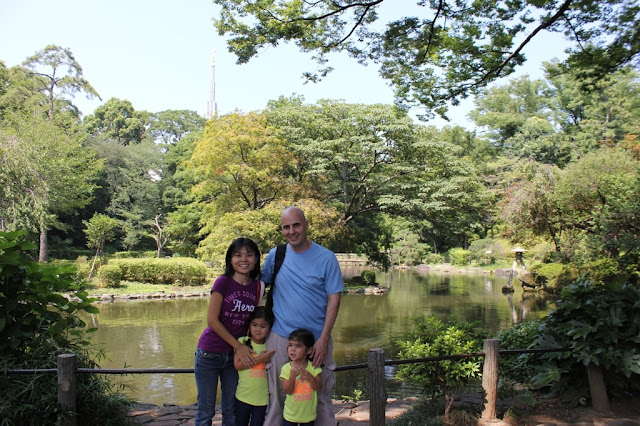 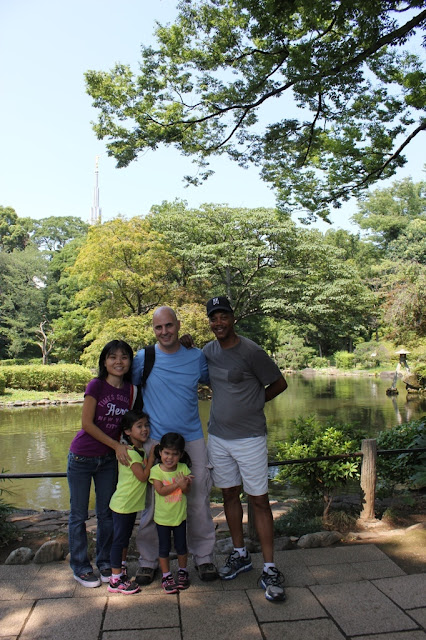 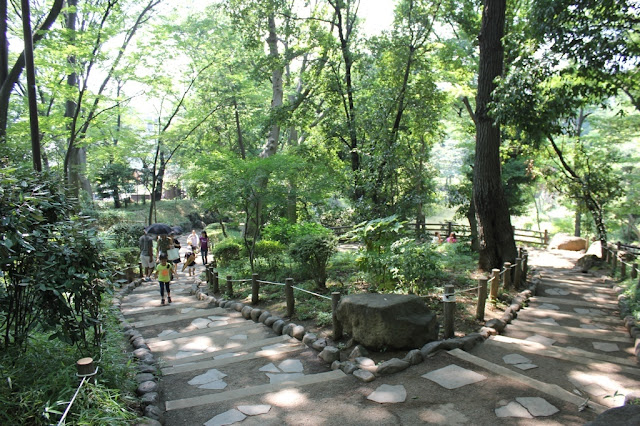 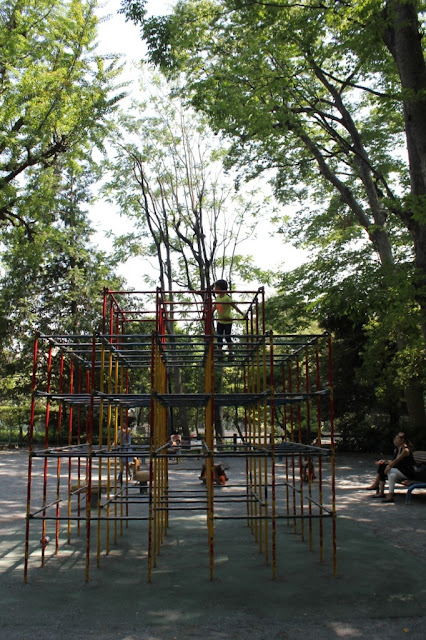 At the park I noticed my camera was acting weird again (notice how auto-focus didn't work in this pic below). I decided I better buy a backup camera at the airport. 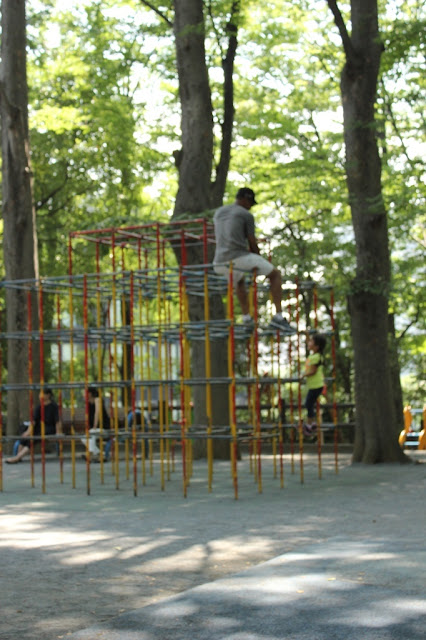 After the park, we made a quick stop at Baskin Robbins (PapaG treated us) and walked back to the hotel. We quickly packed our laundry away and said good-bye to Mimi (who was back by now) and PapaG. They will stay in Japan for a few more days before heading back to Jacksonville. It was so great (and helpful!) to have them here with us. My mom is much more fluent in Japanese than I am and knows her way around Tokyo.
We took a 2-hr bus ride to the airport (which is really outside of Tokyo, and the bus had to make several stops along the way, hence the reason it took so long).
Our girls during the long bus ride (using my portrait lens since my regular one is acting up; of course, I can't use a portrait lens to take pictures of the Great Wall, hence the reason I'm buying a regular point-and-shoot at the airport). 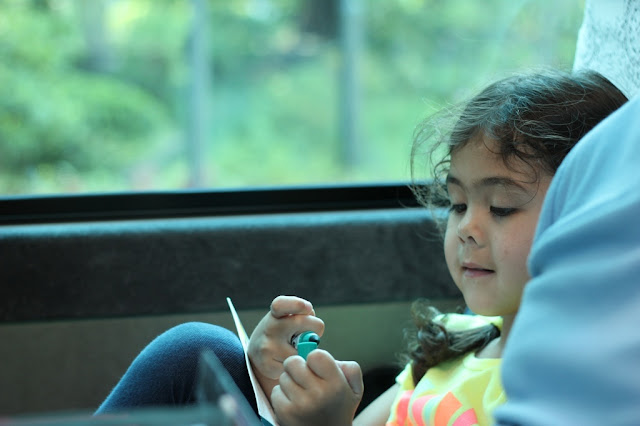 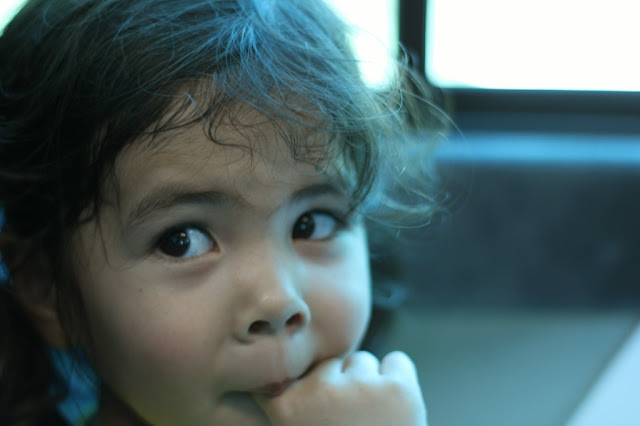 We thought we'd have plenty of time to kill at the airport - wrong again! Seriously, time seems to be flying faster ever since we began our trip. We checked in, found a restaurant to eat at (which must have been the slowest serving place in the entire airport), quickly bought a camera, exchanged money, passed security/immigration, and took the girls to the bathroom...by then we ended up being the last ones to board the plane.
As soon as I boarded the plane, it started. A Chinese flight attendant started speaking to me in her language. I didn't even know she was talking to me, since the language was unfamiliar to me. She quickly realized that I wasn't Chinese and asked me for my boarding pass in English. We haven't even left Japan yet, and I'm already getting a preview of what it will be like for the next two weeks :)
Once we boarded the plane, the girls asked to sit next to each other. So currently as I type this in the air, the girls are sitting right behind us. They are enjoying their movies. These poor girls...we have been on the go-go-go, and they have been doing incredibly well. Once in a while, I can tell that their fatigue is affecting their mood...but overall, they have been our super world-travelers. I am so grateful.
First few pics from the new camera...
Good-bye, Japan 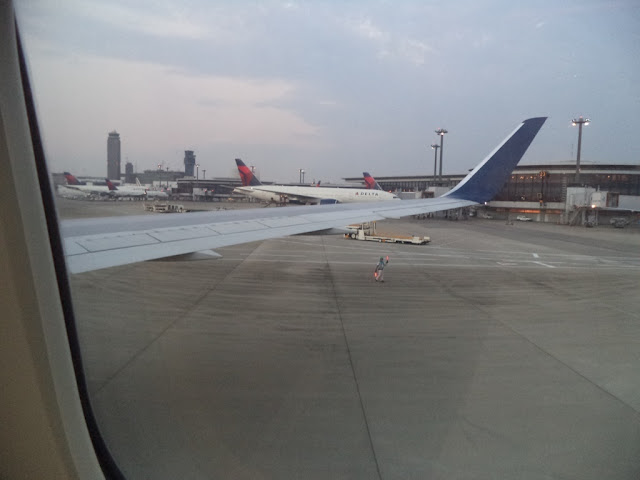 This girl must be sooo tired... 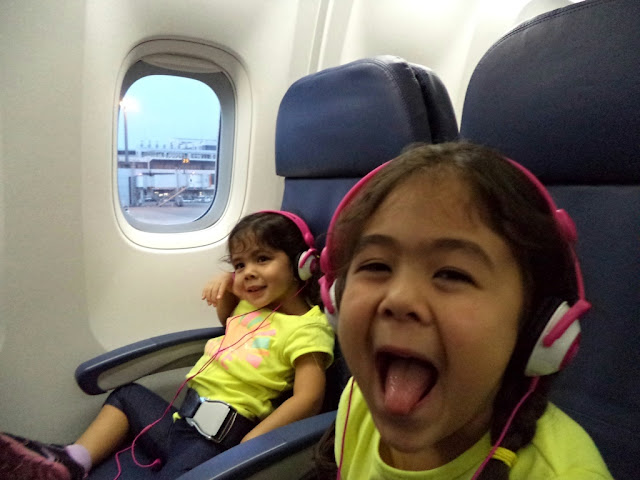 So here we are. Just a few hours away from Beijing (the flight is a little over 3 hrs long). We are actually about to land in the country where our daughter is. Unreal. I am definitely feeling a bit nervous; I don't know when the last time was that I entered an unfamiliar culture. I meant to learn some Chinese before we got there, but I was never able to fit it in. Oh well, ready or not, here we go!
Again, if this post is published on the blog, you know that we landed safely in Beijing. Good night.
God is Gracious,
Maria
Posted by Boo Parry at 8:27 AM