If you are not following our blog everyday (or even if you are), you're probably wondering..."Why are you still in China, when your adopted child has already joined you?"
When you adopt from China, every family is required to stay here for roughly two weeks. We arrived in China on Thursday, July 18th...but that was by choice. We didn't have to be in China (in Siana's province Inner Mongolia) until Sunday, July 21st (a day before our original Gotcha Day). As with most families, we arrived in China a few days early to do some sightseeing in Beijing. We then headed to Inner Mongolia on the 21st. Gotcha Day was supposed to be Monday July 22nd, but we had a one-day delay due to the schedule of the international adoption lady (Mrs. Xue) at Siana's orphanage. We had to stay in the capital city of her province (Hohhot) until Friday, because that's when we were able to pick up her Chinese passport. We then flew to Guangzhou on Friday and Siana had her medical checkup on Saturday (one of the requirements for her visa to be issued by the U.S. Consulate). After that, it's pretty much just wait time until the U.S. Consulate appointment (this date was given to us before we booked our travels to China). Some families are able to have their appointment on Tuesday or Wednesday, and they're allowed to leave China the day after (we receive our adopted child's visa the day after the Consulate appointment). Our appointment is on Thursday, so that's why we're still here...and we'll be able to leave on Friday after we receive her visa. We take the van to Hong Kong Friday evening, and we fly out of Hong Kong back to the U.S. on Saturday morning. After tonight, we only have two more nights at this hotel (and one night at an airport hotel in Hong Kong).
Today was much calmer than yesterday. Nobody got sick, so that's a very good thing. So far this week, our group meeting time (to go somewhere) has been 9:15 or 9:30. We had to rush every morning to get everyone ready and fed by our meeting time. But today, our meeting time was 10:30. What a difference an hour in the morning makes! We had a much more relaxing morning getting ready and enjoying breakfast. We then headed to Shamian Island here in Guangzhou. Just from looking at Wikipedia just now (haha), I learned that it's a territory that was given to France and United Kingdom in the 19th century. There are historic European style buildings there...now used as souvenir shops and restaurants (and Starbucks, of course).
The main goal of visiting Shamian Island was supposed to be for shopping, but we're not big shoppers (plus we have three little ones to manage). We just walked around and took pictures instead. We also found a small playground that helped to kill time. It was another humid day, but that didn't stop the girls from having some outdoor fun. 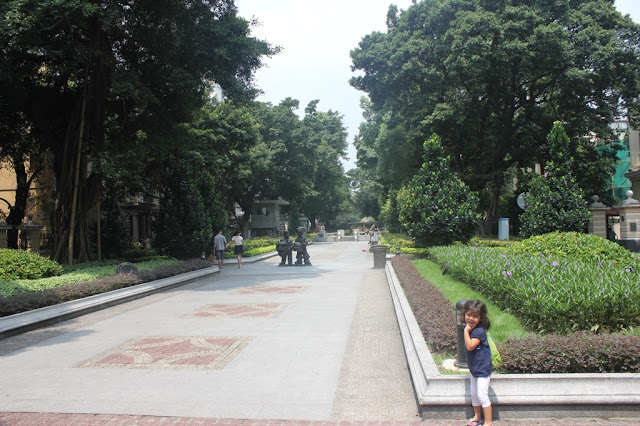 These men were playing hacky sack type of game in the square. 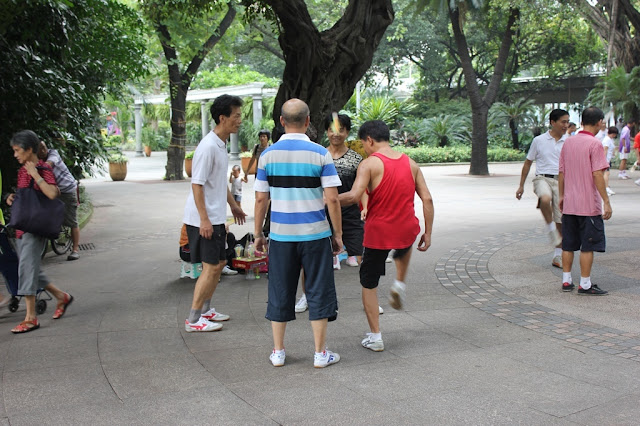 This is apparently a popular photo spot for many tourists. Mini-Lu didn't really want to go near the statues, so this was the best we could do. 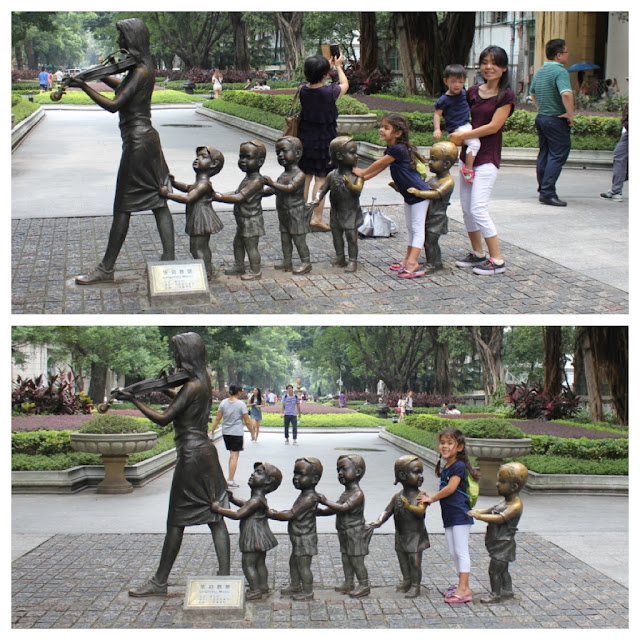 They had beautiful walkways throughout the island. 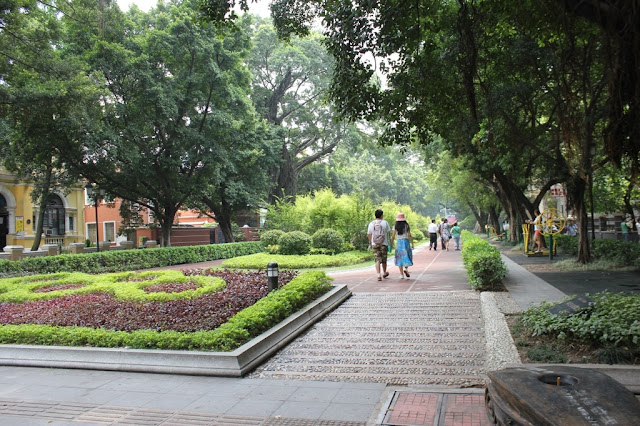 Random photo shoots were happening everywhere here...apparently this is the premiere photo spot. Miko said most people are taking photos to post on online catalogs (she said online shopping is getting huge in China). 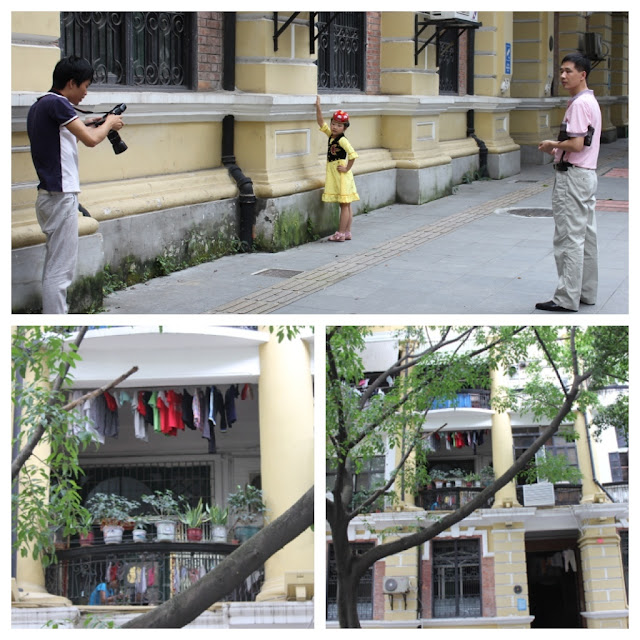 Having fun at the playground... 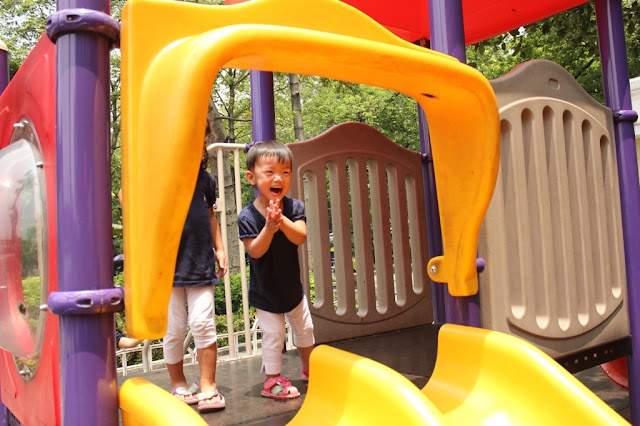 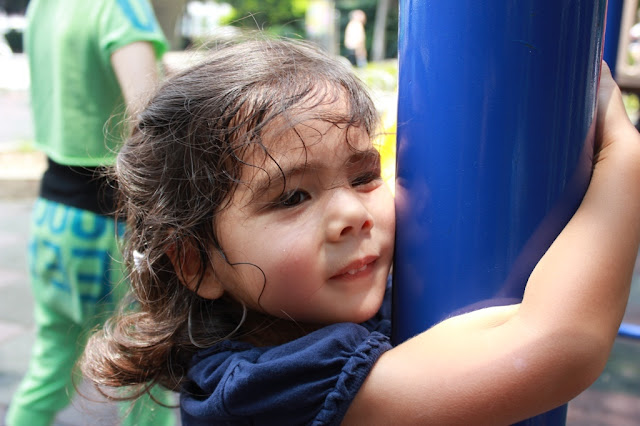 Mini-Lu waves at everyone who walks by. So very cute! 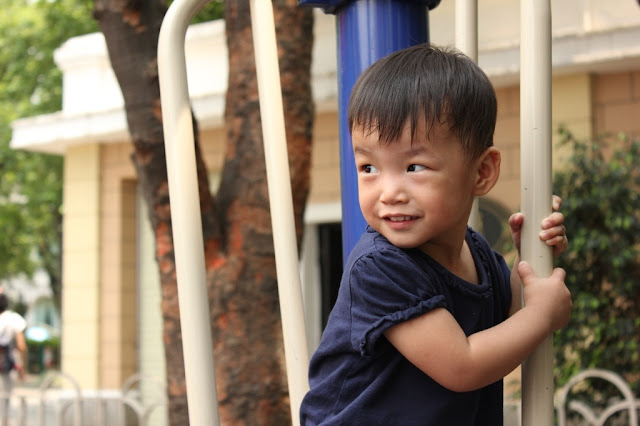 Not sure what this girl's costume was all about... Oh, and you may have noticed from my pics in Japan too - Asian people use umbrellas to stay in the shade. It's the opposite of U.S. They prefer pale skin over tanned skin. They do NOT want to get a tan. 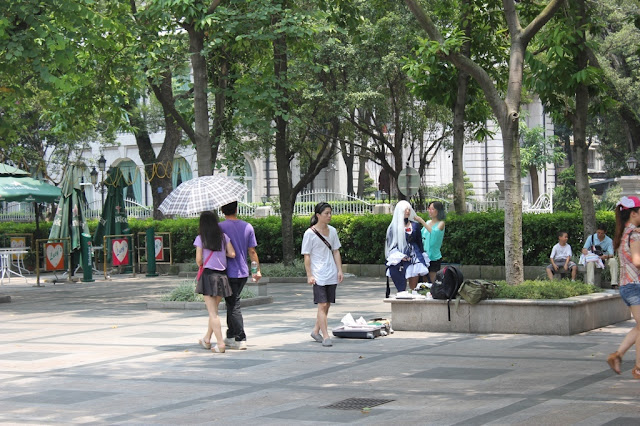 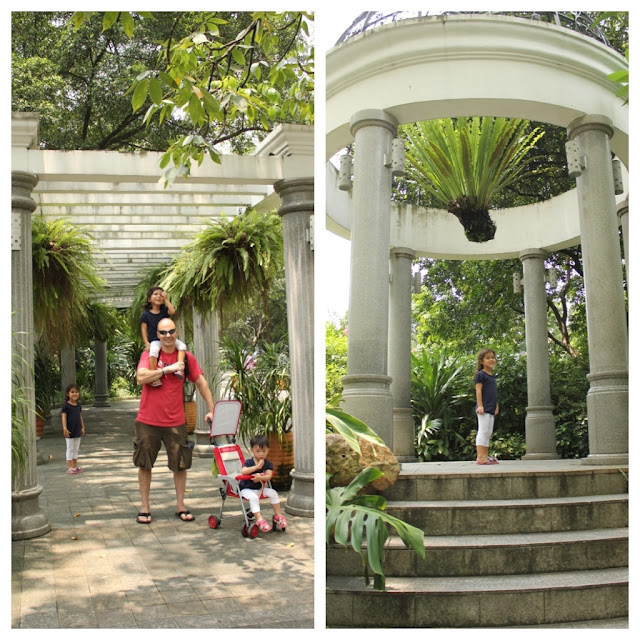 LB loving on Mini-Lu. It's funny though - I think Mini-Lu thinks LB is smaller than her. She always tries to look after LB (bringing her toys/shoes). It's different from the way she interacts with Peanut. 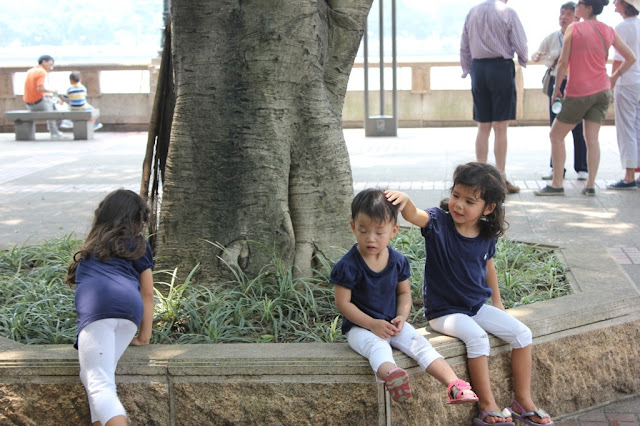 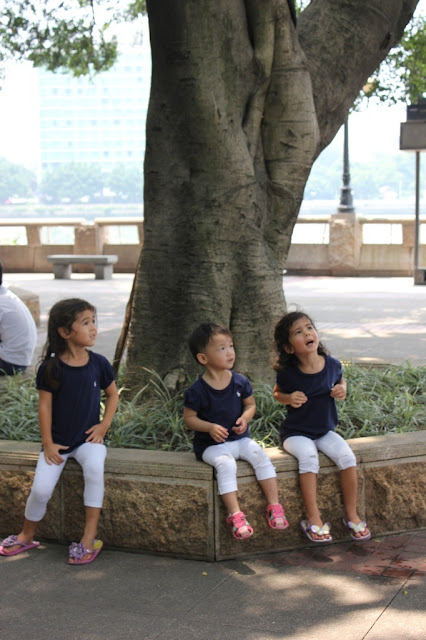 The tricky part was eating the ice cream before they melted. 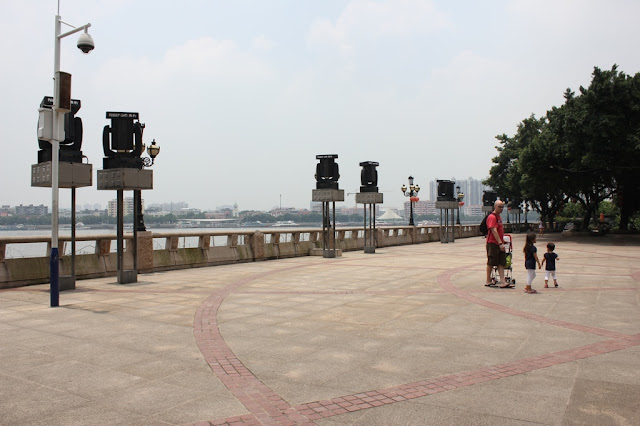 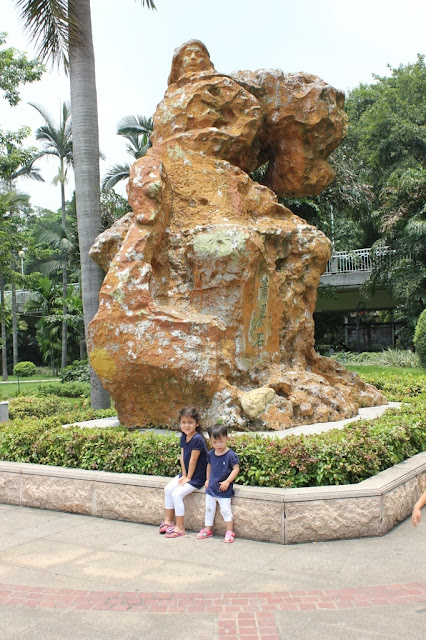 This girl asked if she can have a picture taken with our 3 girls. Our girls continue to receive much attention (people seem to love their curly hair...it's been extra curly with this humidity). 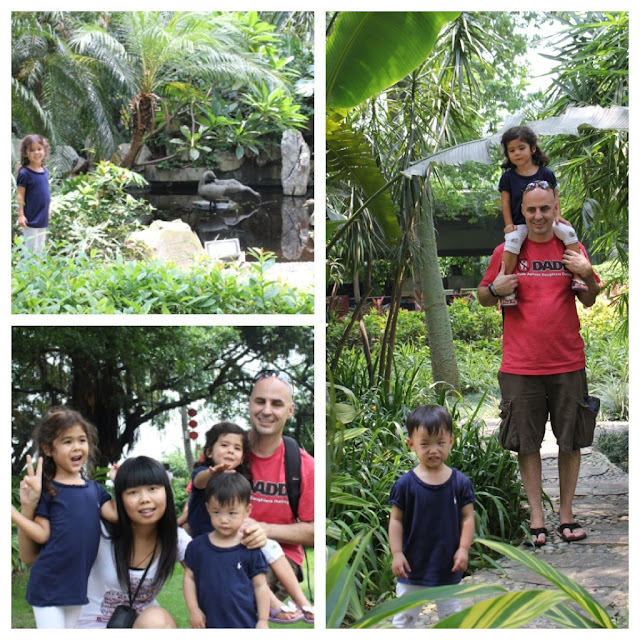 Courtesy of this girl (above), we were able to get another successful family photo. 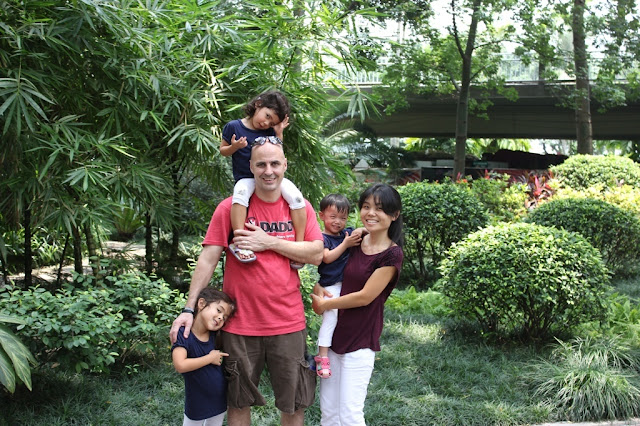 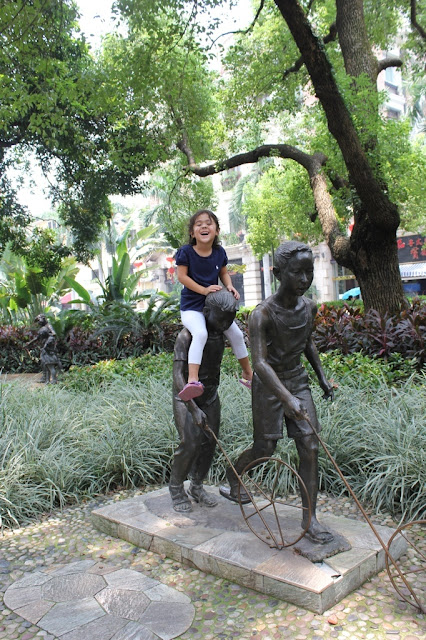 Wedding photos were being taken everywhere. Can you spot THREE brides who are in this picture? 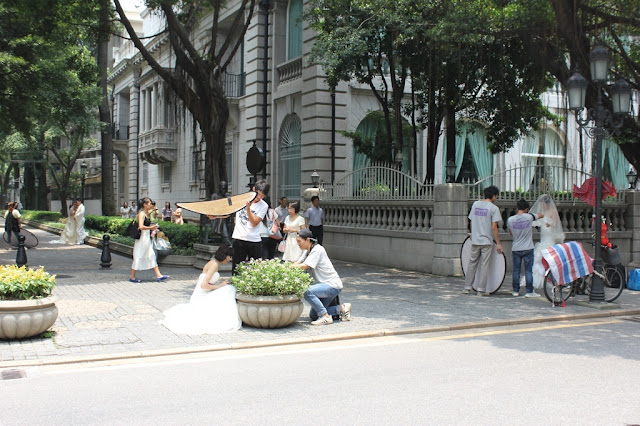 Found the Shamian Island Starbucks - the biggest Starbucks I've ever been to. It had two stories (the one in front of our hotel has two stories too). 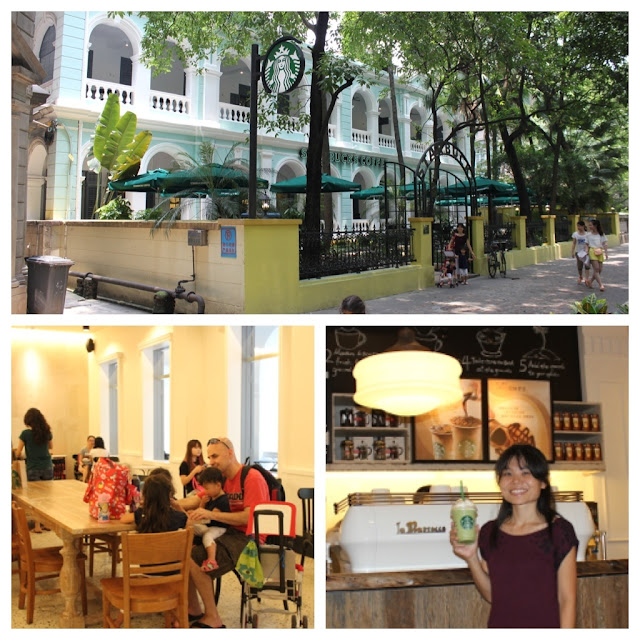 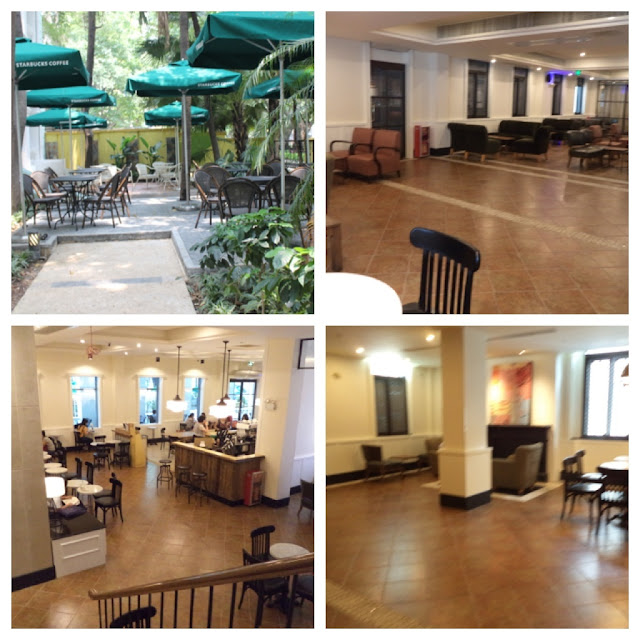 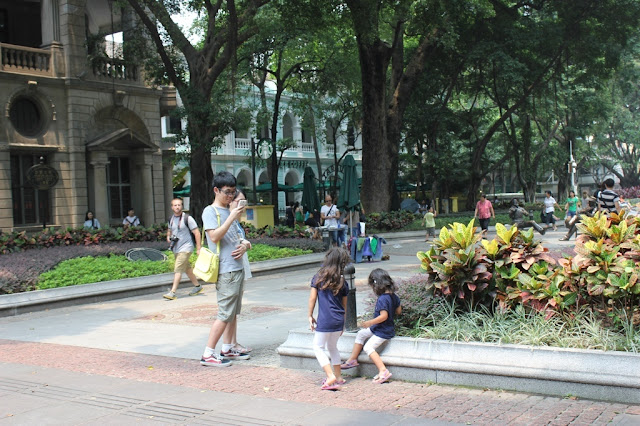 This was what we saw at the entrance of our hotel. The way people drive in China, we're surprised that this was the first accident we witnessed. Drivers DO NOT yield to one another. 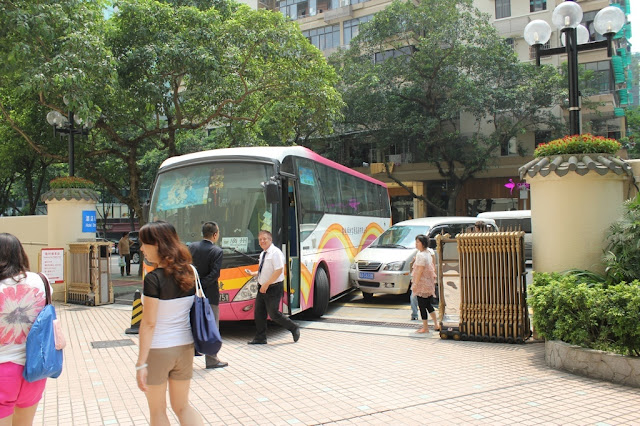 We had a relaxing afternoon back in the hotel while Mini-Lu napped. We grabbed a quick dinner across the street from the hotel, and we spent rest of the evening at the pool. Mini-Lu enjoyed this immensely. She is so independent. She didn't like it when Allan or I tried to hold her hand in the pool. She wants to be a "big girl" like her sisters. 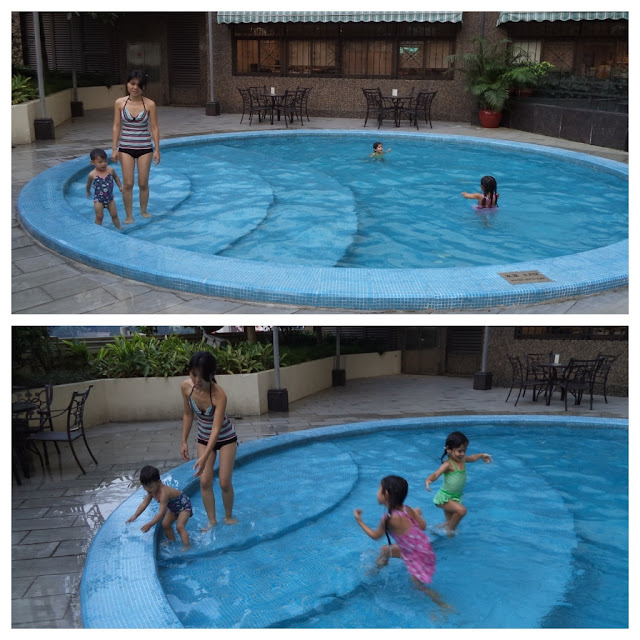 This one (above) is a classic picture of our three girls taking off in different directions. Oh boy.
Panoramic view from the hotel pool.

We see some similarities in LB and Mini-Lu. They both don't like any type of mess on them. They want to do everything themselves (they don't like to be helped). They both try to shove their plates/cups away from them when they're done eating. They like to throw mini-fits when they don't get their way, but they're not nearly as persistent and strong-willed as Peanut. They are both mini-actresses - they get dramatic but you see them peaking over to see how you react. They are both affectionate.
I also continue to sense that Mini-Lu is very smart like Peanut. She figures things out so quickly.
Tomorrow will be another relaxing day. We don't have any group activities planned until the dinner boat cruise in the evening.
God is Gracious,
Maria
Posted by Boo Parry at 6:33 AM