What. A. Day.
This has been the craziest day yet on our traveling adventure, and it had nothing to do with the fact that we just adopted a new child.
Oh, by the way, I began writing this post during our flight to Guangzhou...but of course, I was not able to save it (again!). So my goal is to write two posts today (one for yesterday and one for today).
Allan woke up in the morning feeling sick. I decided to brave it out and take all 3 girls down to breakfast on my own. As if that wasn't challenging enought, within five minutes of getting there, I saw the "look" on LittleBit's face. Too late. She made quite a mess at our table (mostly on Siana's highchair). I seriously stood there for a minute not knowing what to do. I gathered the three girls and quickly went upstairs. When I handed LB off to Allan, he said he had just finished throwing up. Lovely.
Peanut, Siana, and I went back to the dining room. The staff had graciously cleaned up the mess. After the girls were fed, I saw Aggie in the lobby. I explained to her that Allan and LB were sick, but she said both parents had to go to the police station to pick up Siana's passport. When I went back upstairs, Allan had just finished bathing LB because she had thrown up again in the room. So this was the condition we were in as we all climbed into the van to the police station. 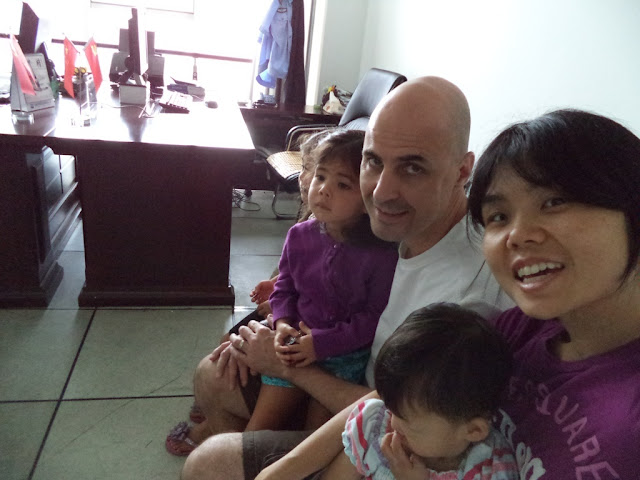 We were thankful that everything went smoothly at the police station. We were able to quickly receive Siana's Chinese passport. We returned to the hotel and began packing. LB was feeling better by the time we ordered room service for lunch. Allan didn't eat anything, but he was also starting to feel better.
Before we left the Sheraton hotel (where we stayed for five nights), we took a picture with this manager from the dining room. 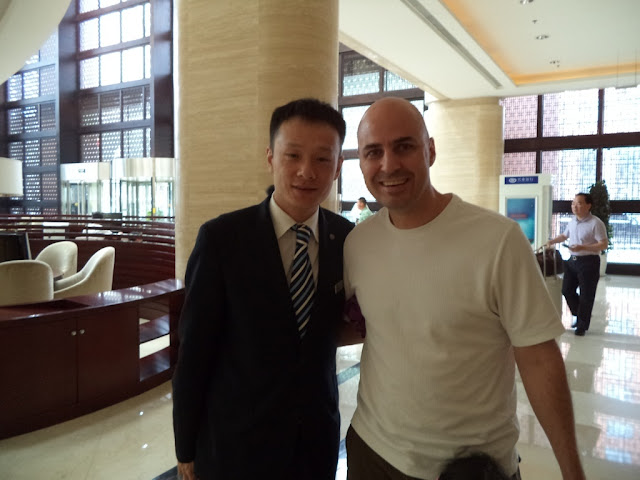 Since the first morning when Allan ordered a cappuccino, this guy made a point to bring one to Allan every morning (he even prepared one to go this morning when I told him that he was sick). I also wanted to take a picture with our housekeeping lady, but she didn't want her picture taken. She was so kind to us everyday; she brought us extra water bottles daily so that we didn't need to buy any at the store (in China we can only drink bottled water). Their kindness were like an oasis in the desert during our stay in an unfamiliar environment.
At 2pm we checked out of our hotel and headed to the Inner Mongolia Museum. It was a very impressive, modern museum. Aggie said it was built 5 years ago. She said most of the museums offer free admission and parking. They had a very cool dinosaur exhibit. Aggie said Hohhot is known for dinosaur fossils. Peanut enjoyed every minute of exploring the museum. This was also the first time I saw other foreigners since arriving in Hohhot. 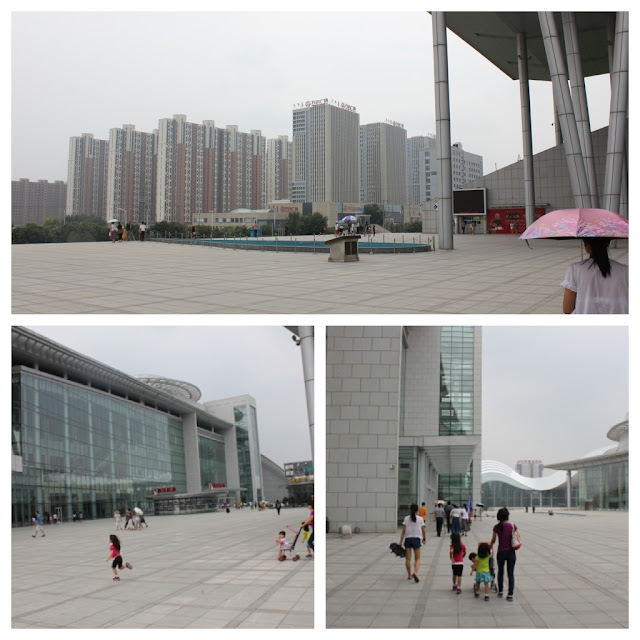 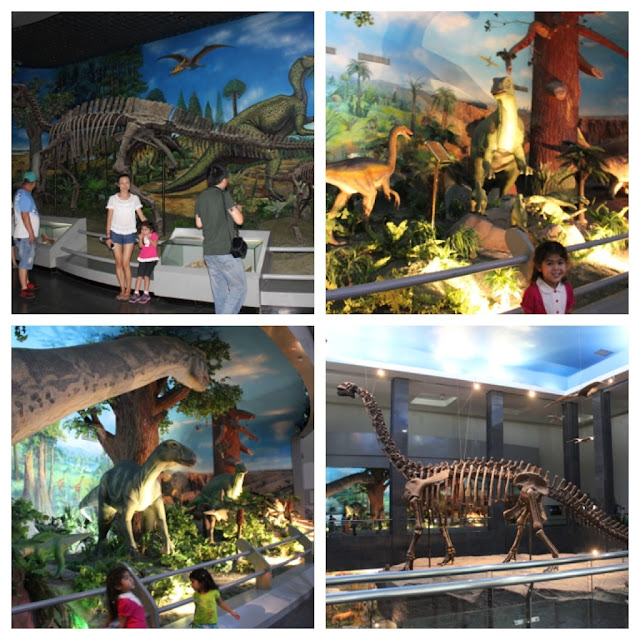 All the signs were written in Chinese, Mongolian, and English. 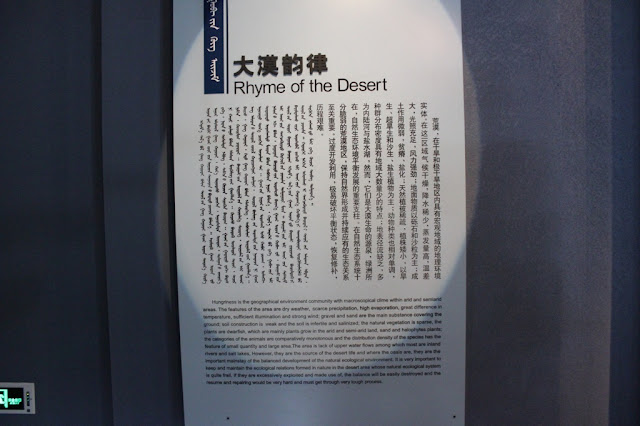 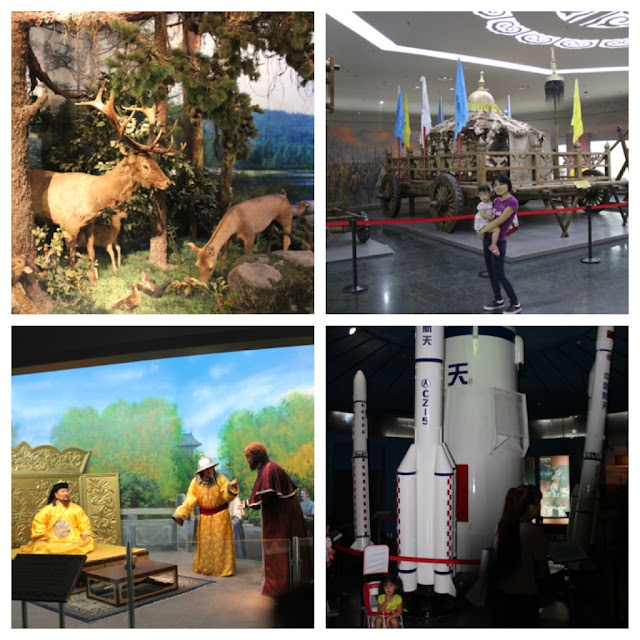 Photo in front of the museum with our guide Aggie 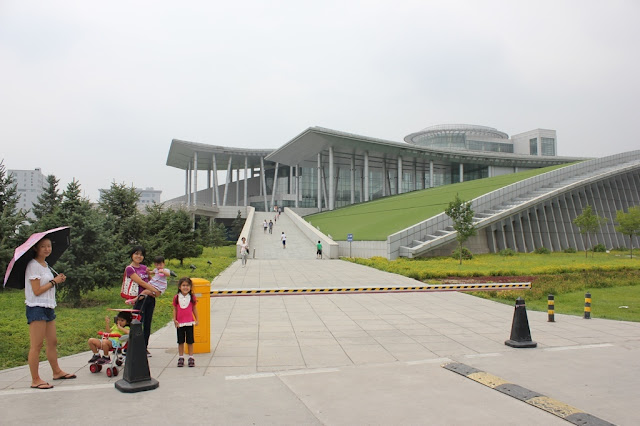 We arrived at the airport by 3:30pm. This was when our Crazy Day Round 2 began. I don't know what it is about airports in China...we haven't had a smooth experience yet. First, Aggie said they couldn't find our names in the system. We waited around for 30-40 min (what felt like forever) while Aggie tried to figure things out. She said she was able to get us on another flight to Guangzhou. This flight (that we were transferred to) was supposed to leave at 4:40pm but was delayed and was now set to leave at 6:20pm. Aggie helped us until we reached security checkpoint. We said good-bye to her there. It was a long walk to our gate. After we reached our gate, we still had about an hour before boarding, so I tried to find some food for us while Allan stayed at the gate with the girls. I was VERY unsuccessful. What we originally thought was a smoothie shop (when we passed by earlier) actually sold flavored milk teas. I stopped by another "cafe" to look at their menu. They had noodles and curry and other foods that sounded too messy to eat at an airport gate. I saw sandwich and muffins on the menu, so I tried to order but they said they were out. Really!?
There was another snack stand by our gate. They mainly had souvenir type of foods. But there were tables around this snack shop and I saw many people eating instant noodles. I asked the lady at the kiosk if she sold those noodles. She couldn't understand what I was saying. I tried pointing around at different tables...at almost every table, someone was eating instant noodle soup. She then brought out a bag of nuts. I just shook my head and went back to the gate, frustrated. When I told the story to Allan, he about fell off his chair from laughing so hard.
Our boarding time came and went. It was past 6pm and we still didn't see a plane at the gate (it was supposed to leave by 6:20pm). Around this time, we started hearing a lot of commotion around the seating area opposite from where we were (still at the same gate). Men were literally hollaring at one another. People were shooting videos from their iphones and ipads. A few minutes later, a Chinese lady came to speak to us in English. She said she's a student in Chicago, and she was home for the summer. It was so refreshing to finally meet an English-speaking person (besides our guide). She told us that the main guy who was causing the commotion was upset, because he was transferred from another flight (like us) and now this flight was delayed also. He wanted a refund.
Here is a video of Siana playing around by our gate: http://youtu.be/pRkMRYNdo_E
Our plane finally came and we boarded the flight around 6:30pm. Siana and I sat in the very back (I mean the VERY last row), while Allan and the older girls sat towards the front. Soon after, we started hearing lots of commotions again. People were arguing back and forth (and let me tell you, Chinese people get quite passionate when they argue). 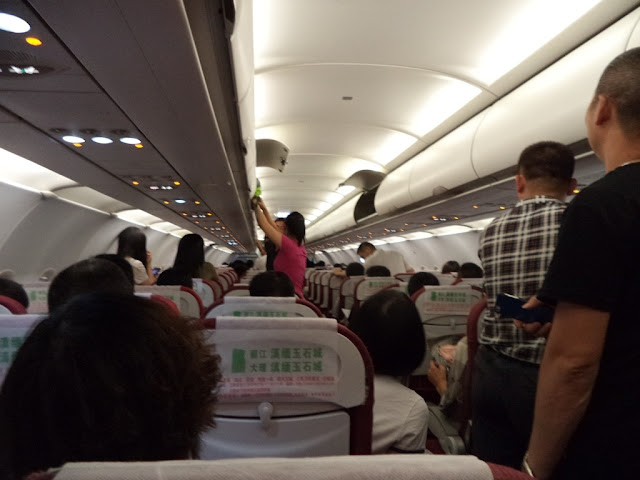 People were getting out of their seats and some were storming to the front of the plane. I was so confused. I saw Allan talking to the English-speaking lady (her name was Angel). He came back to where I was and explained to me that the guy who was originally causing the commotion was still upset about not receiving a refund and he was REFUSING to board the plane. He had about 15 people in his group, so sure enough, the middle of the plane was empty. We couldn't believe it. At first we wondered why the plane wouldn't just take off without them, but later we realized that their luggages were already on the plane and it would become a terrorist threat to take off without them. People in the plane were getting very impatient and frustrated (rightly so!). After OVER AN HOUR (not joking!), the guy and his group finally boarded the plane (what surprised me was that nobody yelled at him to his face when he finally boarded the plane - they all sounded like they were ready to punch someone before he came inside). I could not believe this was the reason we were stuck inside the plane for over an hour. The girls did fine (thank GOD for electronics!). Siana is such a great traveler. She slept for some of it and was perfectly content on my lap for the rest. One thing I can be thankful about from this delay is that Siana and I got plenty of one-on-one snuggle & play time. 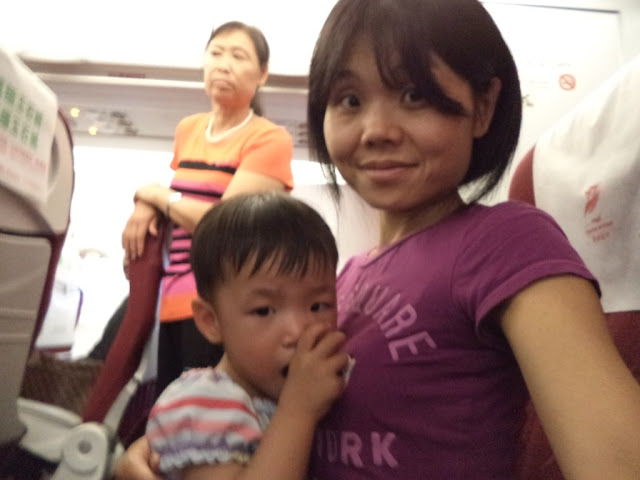 Another video here: http://youtu.be/OOnqIjmEYdw
She is definitely living up to her name - "She brings to light - God is Gracious!"
We finally took off at 8pm. The flight actually seemed shorter than the waiting time (even though it wasn't). We landed in Guangzhou at 10:40pm. When we got off the plane, we realized we had to take a shuttle to the main terminal. We said to each other, "Can this day get any longer??"
When we got to the baggage claim area we saw a sign for McDonald's. I have never been so happy to see the golden arch. 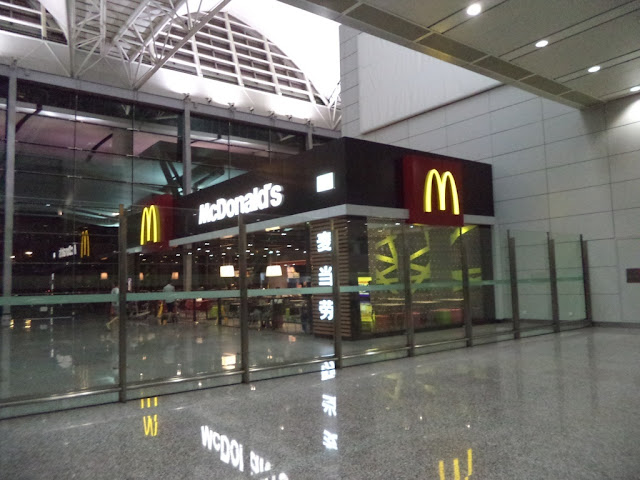 We checked into the Garden Hotel (our home for the next 7 nights). Very big and impressive hotel. By the time we got the kids to bed and got ourselves ready for bed, it was almost 1am.
Long, LONG day.
But so very thankful to be here (from the airport ride we were already able to sense that GZ was a lot more modern and westerner-friendly).
God is Gracious,
Maria
Posted by Boo Parry at 4:19 AM