My heart is so full of emotions right now, I'm about to burst. We were matched with our child on February 17th (a little over a week ago), and we were told it will take about 2 weeks to receive our pre-approval (which would allow us to announce who our child is publicly). For this past week, I've been working on launching this blog, expecting that I still had another week until I will introduce it to the public. Well, every detail in our adoption process since we began in April 2012, with the exception of our home study process, has progressed much faster than the estimated time frame we were given. Pre-approval was no exception. As I was tweaking the look of this blog during LittleBit's nap time this afternoon, I received a phone call from our agency with the news that we received our pre-approval. This also means that we can begin sending care packages to our new daughter. Our new daughter. Wow. I really have another daughter! I want to shout, I want to cry, I want to...just fly over there to get her right now. I knew this period (after being matched until we travel...which is expected to be 4-6 months) would be the hardest. Please pray for me (and the rest of our family) often during the next several months!

So here she is... We are proud to introduce our new daughter, Siana Lu. 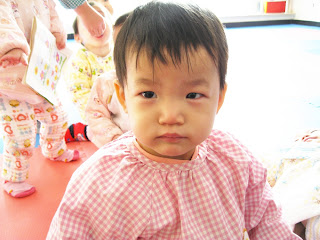 She did not grow in my tummy like the other two, but she has been growing in my heart long before my birth daughters came. Isn't she beautiful!?? She is currently 19 months old. Oh, how I pray we will be able to travel before her 2nd birthday (which will be early July)!
There are so many more details I long to share about this process of being matched with her...but they will have to wait for another day.
For now, I just want to share about her name. On the day we were matched, I couldn't sleep until we came up with her name. I first looked up what the word "summer" was in Chinese (since her birthday is in July). It was "Sia." I also looked up girl names that end with "a" to match our other girls. At one point, I asked Allan, "What about Sienna?" His reply, "It sounds like a car." I went through a list of names that end with "a" with him. He liked "Eliza," but to me it sounded too British for a Chinese girl. I then came back to the word "Sia" and just made up a name that ends in "a." I asked him, "What about Siana? (pronounced "see-ana")" He loved it immediately. When I Googled it, I found out that it was a real name with a meaning. Its Hebrew origin means, "God is gracious." I was speechless. How perfect! We took part of her current Chinese name "Lu" as her middle name. The Chinese character used for "Lu" means "to bring to light/open, to reveal." When her two names are put together, Siana Lu means "to bring to light...God is gracious." I have no doubt this will be her destiny.

I want to thank all of you who have been praying for us and sharing in the excitement with us. This is still the beginning, and yet I feel that we've crossed a huge milestone.

God is gracious. To Him be ALL the praise and thanks.
Posted by Boo Parry at 12:56 PM